Never before in the history of runs have I heard so many comments about how hard a race is! Having never been to Portland I had no idea what to expect. “It’s the hardest race of the year” said one person. “An out and back with a 5 mile non-stop hill on the way back”, said another. Another running friend, after every slightly tricky race this year, said “well at least it’s not as hard as the Portland 10!”

Set on the peninsula of Portland in Dorset, the climb in the car towards the car park is daunting in itself. Steep, rocky cliffs surround sloping fields which slant down towards the famous Portland Bill with its red and white striped lighthouse. The scenery is rugged and dramatic with sea views and run along country lanes. Being a popular tourist sport, and this being a sunny summer morning there was quite a bit of traffic which was distracting but well marshalled.

All In The Head

So there I was at the start line, knees knocking and slightly hungover – I know! – waiting for the race to start. This was a real example of two things. Firstly, don’t get drunk with friends the night before a hot, hydration sapping, hilly ten mile race. Secondly, it’s all in the mind. 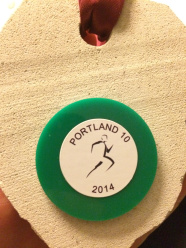 I’d decided subconsciously long before I even started the Portland 10 that it was too difficult, I was too tired, it was too hot and I wasn’t going to do very well! So of course I started running and just…sort of…gave up. Not literally, I carried on running but my heart wasn’t really in it. The organisation was excellent and there were plenty of water and sponge stops along the way. There was even an old lady outside her house with a hose, cooling runners down! Unfortunately though, I got stuck in no-mans land. I slipped too far behind the usually similarly paced runners from my club through laziness (it was a Championship race) and was comfortably far ahead of the nearest club runner. The whole time I was running, I was thinking “I must save myself for that massive hill everyone’s told me about”. But I’m actually not too bad at hills and it didn’t go on as long as I thought. So I ran the downhills slowly to conserve my energy and then had far too much left in the tank at the end.

All finishers did receive a lovely medal, hewn and crafted from local Portland Stone

Next Training Well that race was on Sunday. As testament to how little I taxed myself at Portland, I went for quite a fast but comfortable 10k last night, when I’d never usually even go for a run the day after a longer race!

One of my self imposed, self instructed speed sessions tonight, will do 8k on Wednesday and sneak in a quick 5k before heading off to my brother’s wedding on Thursday. Hoping to do a Parkrun in London on Saturday morning too!

One thought on “Race: The Portland 10 Mile Run”