No idea where this was taken but I’m smiling so must be early on! 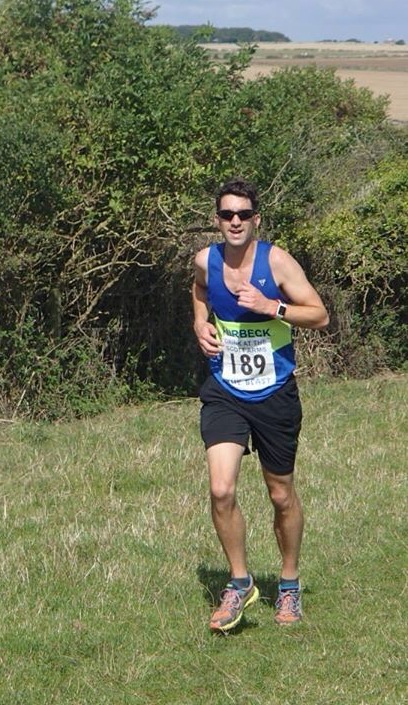 A Walkthrough of The Beast, Corfe Castle

The Beast begins on the edge of the common in Corfe Castle, before swooping round and along open fields for the first 3 miles. As we were running through one of these fields a herd of semi wild horses decided that they didn’t like humans passing through their field. As a group they galloped towards the line of runners, choosing to intersect right in front of us and forcing me to stop and veer round them – scary!

At mile 4 newbies to this race get their first taste of why it is so named, as the route presents it’s first hill. This isn’t just a nice easy road climb, it’s a rocky, muddy, thorny, overgrown path that at times felt like running up a pebble laden ice rink. TIP: don’t wear sunglasses as in the many shaded, treacherous paths you can’t pick out the lumps and bumps. I spent half the race holding mine just so I could see.

When you finally reach the top of this climb the old legs get a chance to refresh as the path winds downhill for about a mile. Unfortunately the top of this path was where I downed my first gel and two cups of water, followed by an agonising stitch which made me slow right down when I should have been making the most of the downhill!

At the bottom of this slope you nip up the first of several sets of steps to the right, and find yourself following the World Heritage Coastpath. Glorious views greet you if you’re inclined to look up, which I did for about five seconds.

This Coastpath section takes you ever closer to dah dah daaahh… THE STEPS. Not even the race leaders can run these steps – Mo Farah himself would have to walk them ; ) The Steps are at about the seven mile mark after several small steep leg busters before them. You run down a scarily steep hill into a valley, before looking up and seeing The Steps in front of you:

Top of Emmetts Hill (THE STEPS) looking back from the top

This was where I had major water envy as the guy in front of me walking up The Steps was carrying a water bottle. Oh how my eyes greedily followed every slosh and splash of the water in that bottle!

Once at the top of the steps you cut inland past a coastguard tower where it levels out for a bit, all the time taking you closer to the finish. Then, at mile nine, just as you’re congratulating yourself on making it this far, you hit the penultimate reason why this is called The Beast. My stats tell me that it’s only a mile long and has an elevation of 300ft – but it feels like this final uphill path goes onwards and upwards forever. And ever. And ever.

Finally at the ten mile point the path levels out as you run into a lovely village called Kingston. You turn right out of the village, down through a small wood before exiting into sunlight with the most amazing panorama ahead. 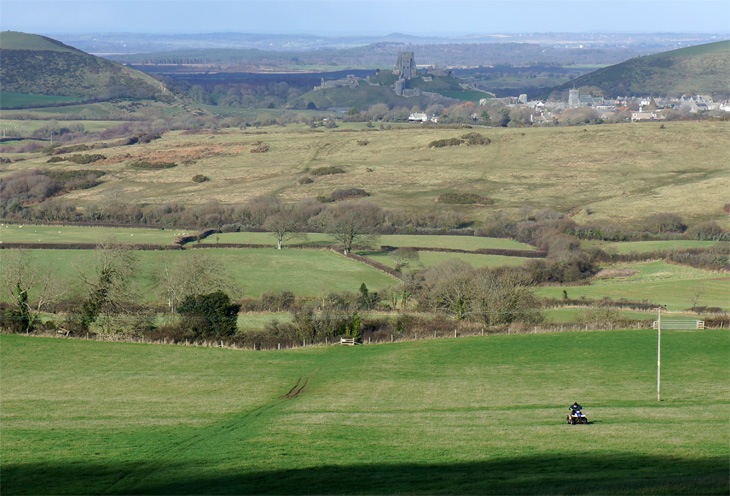 Looking down towards Corfe Castle from Kingston

At this point you know you should be speeding up to take advantage of the final downhill but I just couldn’t, my legs wouldn’t listen to my brain or gravity, they just kept plodding!

Then, finally you think you’re at the end but just as you hit mile eleven – boom – another two hills, these are the final two beasts. Swing down a grassy hill, turn right up a little wooded path for 20 metres, over a style, and there it is in front of you – THE BLESSED FINISH LINE!

Dehydration Sucks And then, I won’t bore you but I had to lie down and be treated by The Doc for 90 minutes suffering from dehydration and then went home to rest it off in bed. I will say here and when I see you next but thank you so much Steve, I was actually really scared about what was happening and you just calmly talked me through it and back to (near) health!

If you ever see someone in difficulty with dehydration, get their legs up high, prop up their head slightly, tell them to take calm long breaths and feed them lots of energy drink / lucozade / water / sweet tea. Obviously before you do any of that send for the first aider / medic.

You can see how my heart rate jumped up above 200bpm as I climbed The Steps and stayed up there for a good 3-4 miles. This running business can’t be healthy?!

Time To Try a Triathlon … »