This seems to have become my month of trying new things! Last week it was my first triathlon and this week I partook in a little track and field. Athletics seems to generally be split between two types of event; invitational and open. Invitational is as it sounds, whereas for an open event, ANYONE can turn up! This had to be entered into prior to the day and each each you enter costs just £3. Seeing the entry form and the list of events I was swayed to enter three; the 200 metres, the 400 metres and the long jump. Seemed like a good idea a the time… 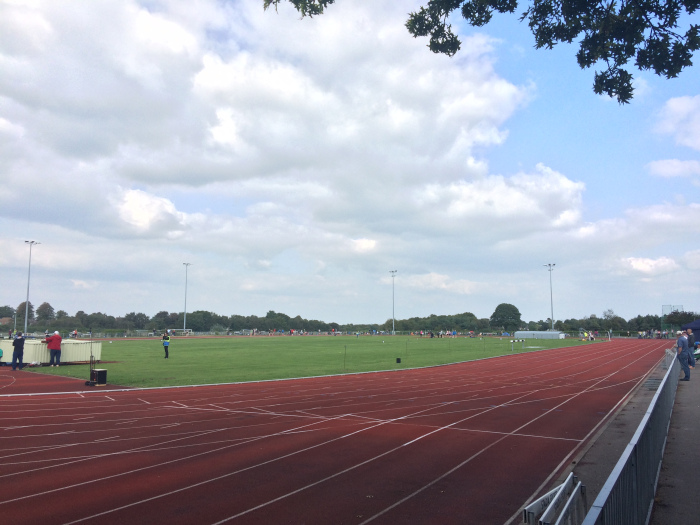 So arriving at the track for 10:30 I registered, stuck my numbers on the front and back of my vest and went for a warm up. Rather than the light jog I’d usually do to prepare for a 10 mile run, I did the warm up properly as a) my body is not used to sprinting and b) I had a whole day’s events to get through and didn’t want any pulls, sprains or other injuries. So I jogged for 10 minutes, before doing a series of dynamic stretches (heel flick, knee raises, high jumps etc) for another 10 minutes, followed by 30 metres fast, 50 metres fast and 30 metres fast. Feeling warmed up and ready I jogged around to the start area.

The vets were called first and before long, off they zoomed. I then had a panic about blocks! Did I have to use the blocks, should I have bought my own, would I be loads slower without them. We were called up to race and a number of the other competitors suddenly appear with bags carrying their own, customised running blocks! They deftly pinned them to the track in their lanes whilst I walked over to the trolley I’d discovered holding a load, saw how complicated they looked and opted to go without. To my relief I saw the guy on the inside lane to me was going ‘block-free’.

ON YOUR MARKS… we all walked forwards to our lines. GET SET… we crouched into the ready position. Click. Yes, that’s click not bang! We had three false starts as the gun wasn’t firing! I thought I was going to die of an adrenaline overdose!

Finally the gun went off. Head down for the first twenty metres looking at the ground and powering my legs as hard as I could, gradually raising my body to the upright position. Fully upright, I hit my stride and headed for the finish line, finishing in 23.8 seconds – not bad for my first sprint in about 15 years since school! Here’s the results.

This was the one where I felt like a rank amateur. The four other lads in the long jump had special track spikes for this event and they used tape measures to precisely mark the start point of their run up. Before each one started they did the strange pose that long jumpers do before doing that slow-getting-faster run up that you see them do on TV.

Haha look at that face – CHEESE!

We had four attempts, with me being variously way over the board, way short of board or in jump three, doing a quite big jump before toppling backwards (I got sniggers from the judges on that one).

Anyway, my best jump was 5:11, about 20cm behind the others but at least I now have an official long jump distance to my name!

Ok I performed so dismally in the 400 I feel I need to give it some context! First off, the long jump is surprisingly tiring. Four lots of 40 metre sprints, each with a big jump at the end – after the 200m all out only an hour before my legs were feeling pretty empty by the long jump’s close. Looking at my watch I saw I had 20 minutes until my heat of the 400 so I ran off for a jog. I knew I needed to raise my body temperature and get my heart rate up ready for the 400 so this seemed like a good idea! At this point my legs were really complaining about having to do more work but I gently upped the pace, so after ten minutes I still felt heavy legged but aerobically ready to run. With ten minutes to go I figured I’d go and sit down for a few minutes to get my breath back after the warm up and register. Jogging round the the track and official clocked my number and shouted at me “You! 487! Get in lane 8, you’re on now!” Due to the small amount of competitors for the 400m, they decided to bring it forward and put everyone together

I knew as soon as I kicked off from the start line that it wasn’t going to be good. I managed to keep up with most of them for 200m but being in the outside lane, on the final curve I dropped behind  and the usual ‘kick’ that I have in my legs for a sprint had completely deserted me. By the time I crossed the finish line I was pretty much walking.

Lesson learned – don’t enter loads of track and field events right next to each other when you’re a 33 year old doing said events for the first time!!

What a fun day though! I’d recommend anyone give it a go. Next time I’m just signing up for one event though : )

Full results on Power of 10 here

Now back to my long distance training, what with all these triathlons and track meets I’ve been neglecting my longer runs – so back to it!