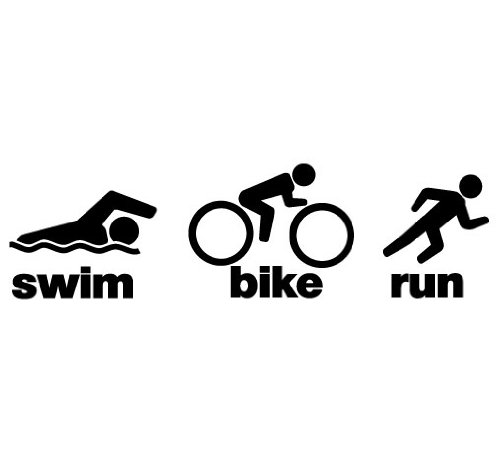 Having been unable to run for a week due to cheap sock induced, half marathon blisters I had the epiphany on Sunday of swimming to keep my fitness up whilst unable to run. I used to swim a LOT in my teenage years and, after returning to the pool on Sunday, I enjoyed it so much that I went back last night for more. On Sunday I swam 60 lengths (1.5k) progressing last night to 80 lengths (2k). I received many strange looks from the elderly ladies as I strove to make myself as out of breath as possible, stopping and panting at the edge of the pool every 10 lengths!

But us runners are a little bit mad aren’t we? Putting our bodies through the mill in the quest for ‘The Next PB’…

I’d never really considered triathlons before. I’d always considered them a bit like I do endurance races – a distraction or excuse for running slowly! But after enjoying my swimming so much and feeling confident after last night’s session I started to Google local triathlon races – of which there were a few.

“Ah”… I thought. I need a bike. So off to Google I went, in search of a cheapo triathlon bike. Well much tea was spluttered when at the top of the results was a Merida 24 Warp Carbon bike for nearly £8,000! Ok, I thought, I’ll just find something a bit cheaper – not happening – these bikes are expensive:

My god! I guess that’s why running’s so popular! That’s a real barrier to entry, making Triathlon a sport for those that can afford the gear; decent goggles for swimming, a ‘trisuit to swim/run in, a decent bike and trainers. That’s one expensive sport!

I may yet enter an off-road duathlon near to me with a trail/forest route. That way I can use my old mountain bike and just where my regular shorts and t-shirt!