I found this great video of Ryan Hall (US half marathon record holder) going through his track routine with his coach Terrence Mahon. It includes warm up and warm down and really interesting to hear what the professional middle distance runners do!

First half-marathon of the year…

That makes it sound like I do loads! It was my third ever half marathon after doing the same race last year and another, The Sturminster Newton Half in August.

This was very nearly the first race ever that I couldn’t finish. NEARLY! Some courses are labelled ‘flat’, some ‘undulating’ and some ‘hilly’ – well this was hilly with a capital H! As you’ll see on my About page, one of my running targets for this year is to run a half in under 90 minutes. I was so close and manged to knock four and a half minutes off my HM personal best to do it in 01:33:03!

Route Profile of the Blackmore Vale Half Marathon

My usual tactic in a longer race is to take it easy for much of the race and then, if I have something left in the tank, speed up for the last mile or so. However, I often have so much left at the end that I sprint over the finish line, frustrated with myself for not trying harder! So this time I thought, ‘screw it’ and went hard (for me) from the off. I felt good for around 7 miles but as you can see from the course profile above, there’s a particularly nasty incline slap bang in the middle of the race. Having run 6:30 minute miles up until this hill I was shattered! Coupled with a nasty blister I ended up shuffling along between 8-9 minute miles for the last two miles, with a horribly steep hill right at the end.

The final hill of the Blackmore Vale Half Marathon – doesn’t look too bad from here!: 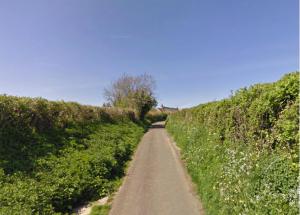 End of the Blackmore Vale half marathon

If this blister clears then Tuesday night speed session on the track.

It was a lovely course, through Dorset countryside and on winding lanes. Up until 9 1/2 miles it went very quickly with the mile signs peeling away behind me unnoticed. Then came the mega-blister : ( I had decided to try wearing my new compression socks to see whether they actually work which, combined with fairly new trainers did not end well! Cue stopping at 8 miles to pull my socks up and retie my trainers and then cue limping on my blister for the last 4 miles!