Now this was a lesson in the mantra ‘Listen To Your Body’! After Tuesday night’s track session, my legs were feeling a little tired as I stepped out of the car to join our Wednesday night club session. As we warmed up for a couple of km they were still feeling heavy. By the time we’d run 7k’s worth of sprint/jog, sprint/jog fartleks they felt like lumps of lead! Felt alright this morning though so no harm done…

The training itself was exactly 9km, including warm up and warm down and lasted precisely 44:07 (thanks Garmin!) 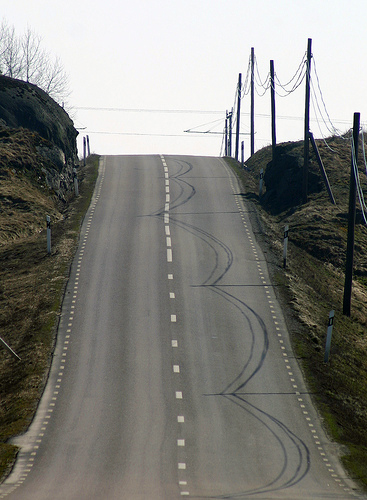 There were two interesting things that I noticed last night on how to maximise a training session:

1) Include some horrible hills

Sprint up them, as fast as you can. Don’t think about the next one. So I guess it was a fartlek hills session (Swanage is a hilly place1)

In a nice way. From personal experience even though I think I’m pushing myself as hard as I can when doing a solo speed/hill session, I’m usually not. I know this because when doing a group session I run much faster (to keep up), much harder (I’m not the one choosing the hills) and for much longer (no chance of ducking home early).

The moral of the story? Running clubs are great – join one!

An easy-verging-on-tempo run tonight after two evenings of speed work in a row! Then off to Cornwall for a weekend’s relaxing (spelt ‘running’!)

The benefits of a fartlek session are the same as any speed training in that you’re essentially teaching your body to run at a faster pace. Similar to a track circuit session, the aim is to run at your target pace for concise periods, with short rests inbetween bursts to get your breath back.

So, still sore and achy from Tuesday night’s double of a track/speed session followed by football, I approached last night’s club night on the basis that I wasn’t going to go too hard at it. Unfortunately it’s not in my DNA to run at anything less than 100% effort! The moment a target is called out and there are other people running towards it, I HAVE to get there first!

Last night’s session began with a 1.5km warm of slow and easy running before we reached the flat and the start of our fartleks. These were intervals run at 80% effort for varying lengths (appr0x 100 metres) with slower running in between sprints. So it goes… jog…jog… “3RD STREET LIGHT ON THE RIGHT!” Jog…jog…jog… “1ST STREET LIGHT ON THE LEFT!” …jog… “TO THE GATES OF THE PIER!!“… etc etc for around 7km.

This of course was followed by a slow jog home (although with one surprise sprint of “TO THE ICE-CREAM HUT!!“). Alas it’s winter, freezing cold and the ice-cream hut was boarded up…

That’s been two nights of intense running so tonight will be a nice and gentle 45 min jog at around 7:30 min mile pace. Then Parkrun on Saturday!