Parkrun is an excellent way to monitor how fit you are as it’s  a free, weekly, timed run. I use it as a barometer of my fitness; each week I do it, I try to beat my personal best time although this doesn’t always happen! When I first did Parkrun on the 14th Jan 2012, I finished in 22:18. My aim at this time was to run it in under 20 minutes. At this point I wasn’t doing much running, perhaps the occasional Parkrun and and a mid week jog, but in July 2012 we sold our house and had to move in with my parents for a couple of months. I started going along to their running club once a week and went out a couple of evenings after work. I also resolved to do at least one ‘long’ (10miles/70-90mins) run every Sunday. After this summer, I continued with Parkrun and was over the moon to run it in 19:59 at the end of Sept 2012!

Well, then of course I set my sights on going under 19 minutes! This was going to take a bit more than the occasional jog and long run and it was at this point that I learned about speed work and first read the mantra, ‘if you want to run faster, you have to run faster. So in September 2013 I started going to speed sessions with a club at the local athletics track. this involved workouts like 12x400m or 6×800, or mixtures of fast paced 400s, 800s and 1000s. All run at faster than 5k pace, with short rests in between. These speed sessions, combined with weekly hill repeats, easy 10ks, long runs and regular races (from 5k to half marathon) saw me hit 18:55 in November 2013. Then I figured it was just a case of consistency, so I continued with the same program of running into 2014 and wavered at the 19 minute mark – sometimes going just under, sometimes just over. But patience is a virtue in running and good things come to those who train and wait… It takes a while for your body to make all the adjustments it needs to, to run at these faster paces. Better capillary networks, increased muscle fibres, increased heart and lung efficiency and, perhaps most important of all confidence in your own body and ability.

So having gone under 19 minutes in November 2013, a year later I’m still trying for under 18 minutes. I ran dead on 18:00 this Saturday, frustratingly one second away from my aim but very close! When I do, I’m sure the next target will be under 17 minutes, however the faster you get, the harder it is to slice those seconds off! But, as Westlife famously sang… ‘that’s myyyy goal’ ; )

View all of my race history here

Is there such a thing as a fun run? The slower or irregular runners who’ve turned up for a one-off, Sunday morning run definitely don’t look like they’re having fun… The competitive club runner types at the front do have fun, but more a twisted ‘fun’ derived from the pain of pushing your body as hard as it can go. Anyway, I digress!

The Lifeboat Loop is a 5k race held to raise money for the RNLI as part of Lifeboat Week. Beginning at 9am, the weather was perfect, not too hot, not too cold, not too windy. Now this race is a race of two halves as it’s straight uphill for 2k, down a slope, along a coast path with amazing views, up a horrible, horrible hill that runs along the edge of a castle, and back downhill for another 2k! I don’t know of any other shorter races that begin with so instant and steep a hill. According to the heart rate monitor on my new watch, mine peaked at 210bpm at the hardest point!

The route is so picturesque, with the halfway point hitting World Heritage awarded coastline: 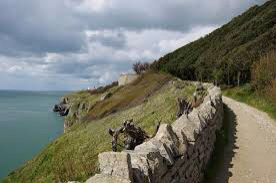 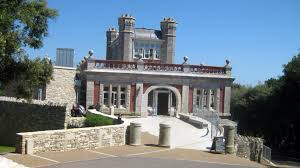 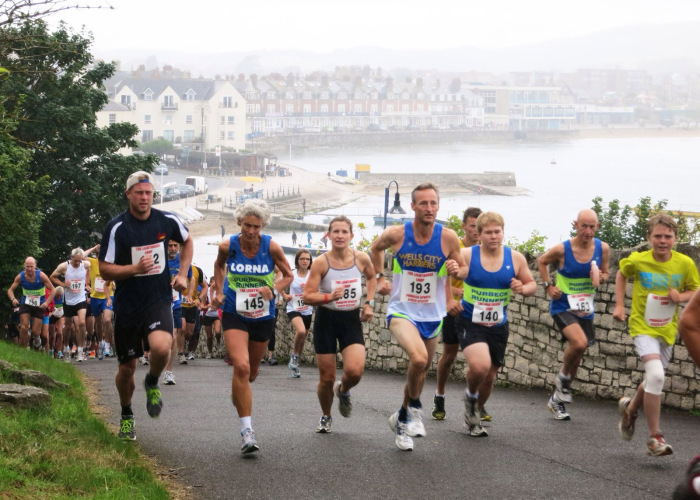 First of all I aimed to go to Purbeck Runners club night tonight. But then I read that there was a heavy duty hill repeats session planned and with my timed mile at Magic Mile tomorrow, I didn’t want to do anything too taxing. Plus I still have a vague and general overall tiredness from Sunday’s half marathon!

So I donned my trainers for what was going to be an easy 10k, but I stupidly selected my Newton MV3 racing flats. I forget that these shoes only like to run fast. Anything under 4 minute km’s and my calfs start to hurt in them…weird. So anyway, by 2.5k my calf was killing, I knew I had this. Magic Mile thing tomorrow, so I just listened to my body and turned around for home.

Next Training Magic Mile organised by Marathon Talk tomorrow evening. 1 mile as fast you can go..!

A really nice run last night, although I need to get over my view that short runs are pointless. I was pleased to do a hilly 5k in 20:30 and, looking at it from an ‘effort based training’ view, it was great – I was shattered the whole way round!

There really is nothing better in my opinion, than, after a hard day at work sitting behind a desk for seven hours, lacing up and going as fast as you can for 5000 metres. The best stress relief in the world!

I’ll try and fit in 7-8k this evening and perhaps a run tomorrow morning if I can (I LOVE morning runs!) Then on Friday it’s an Upton Time Trial – 3.5 tough miles as fast as you can around a country park…

We were in London this weekend for my brother’s wedding, which most normal people would use as a good excuse to have a short break from running… Not us though. Staying in Chiswick, a quick look online told me that there was a Parkrun around the corner (a 2.5k jog) in Gunnersbury Park. So, after an evening of festivities on Thursday night and a repeat of this on Friday night, me, my wife, mum and dad and got up early on Saturday (wedding day) for Parkrun. 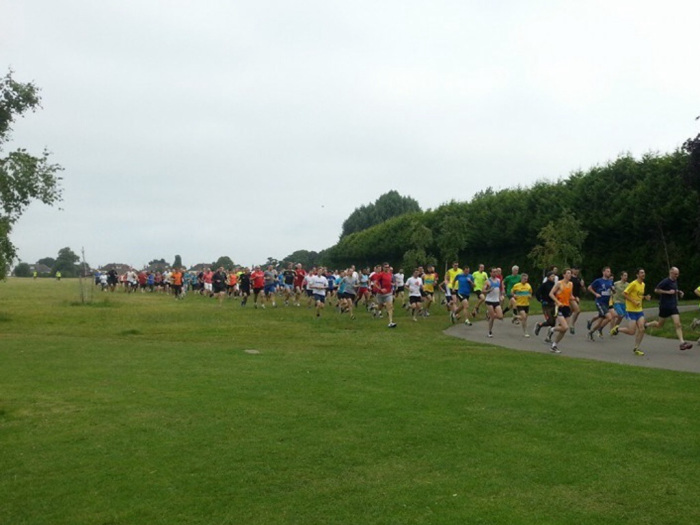 Our usual Poole Parkrun is nearly as flat as you could hope for, so when we arrived here the sloping field gave the impression that there would be some hills involved. The start reminded me of that competition where they roll a large round cheese down a hill and hundreds of people madly run down after it! Beginning midway up a slope, in a field with quite long grass, 300 people lined up in a long line and began by sprinting down the hill towards a funnel like path. You can see me on the right of the pic above, in yellow top and blue shorts!

Because of the downhill start we all began really fast but this was followed by an uphill slog and then running through long grass. The end was a 100 metre uphill slope, which I had to sprint up to overtake dad with 20 metres to go!

Then off to the fun of being best man at the wedding!

The Corfe Mullen 5k is a strange one. It’s a fun run that’s put on as part of the small suburb’s  annual carnival, as a charity fundraiser. You’d think that this might mean amateur locals puffing their way round and a guy with a stopwatch lazily writing down who won for the local newspaper.

OH NO! Definitely not. Whilst the atmosphere is carnival like, with people cheering the youngsters and three-legged racers, the main event the 5k is excellent. Well organised from arriving to park, signing up, running and leaving. There is quite a large number of entrants, with many people from the local running clubs taking part. If you think this is going to be a quaint village race to pick up a bit of easy bit of  silverware, you’d be very much mistaken!

This photo taken at the start by local club Poole Runners, makes it look like I’m winning! 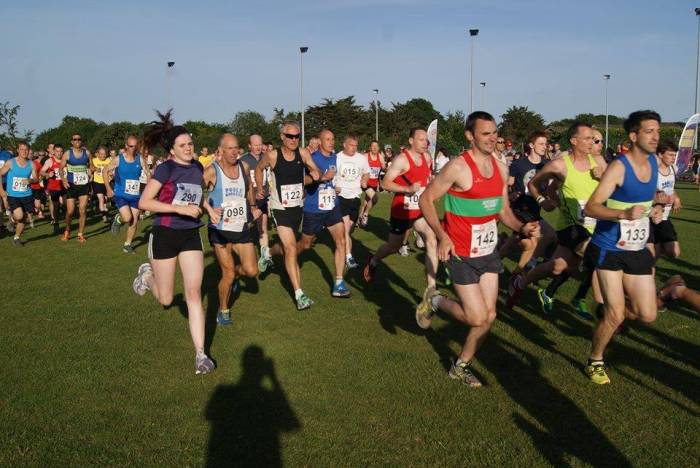 The route is really nice too as it begins on a school field before meandering through leafy meadows (with a short hill) and back on to the playing field. The hardest thing, with all the twists, turns and corners was maintaining a steady pace but this also adds interest. After a day in the office there’s nothing like running in the countryside!

And strangely (with all the twists/turns/hill I got my 5k PB in 18:30 (Garmin time, still waiting for official results)! 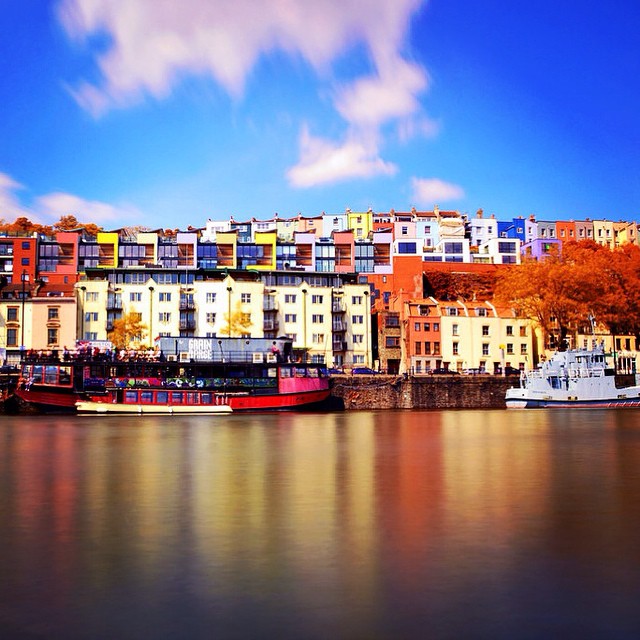 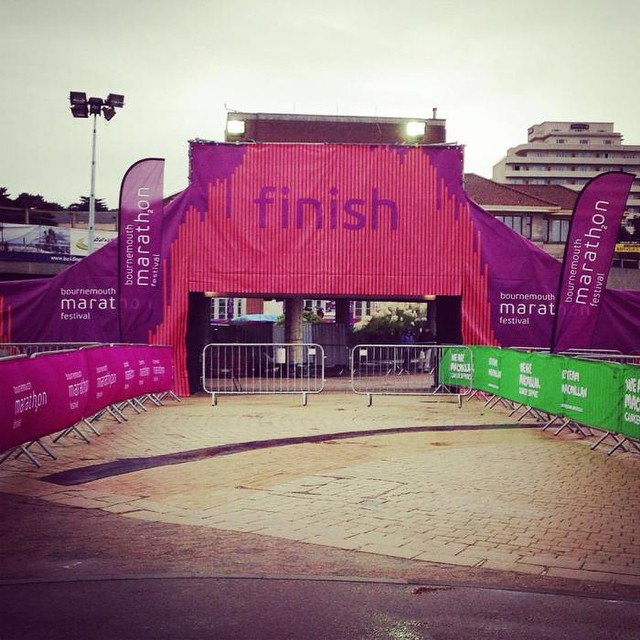