The Apple Watch Sport For Runners

Towards the end of 2014, Apple announced their impending entry into the world of wearable technology, by telling us about the Apple Watch. Available in three versions; the Watch, Watch Sport and Watch Edition will undoubtedly sell in their millions to early adopters, but how useful are they to us runners?

Well first off, there are 25 different types you can get, ranging from aluminium cased Apple Watch Sport, to the 18-Carat gold, sapphire crystal £13,500 edition. Hands up who wants to go for a rocky trail run wearing that heap of bling?!

So what is it and why might you consider buying or not buying an Apple Watch?

Summary of the Apple Watch Sport for Runners

1. First of all you’re going to have to measure your wrist and choose a colour.

The Apple Watch Sport comes in five colours (straps) and each of those is available in 38 or 42 millimetre sizes. Here’s Apple’s official sizing guide so you can work out which size you might need. You get two straps in the box though so, you know, one sweaty running and one for normal use.

2. It has a built in heart rate sensor, accelerometer and gyroscope.

So if you’re looking to do an effort based run using heart rate zones, you can do this.

3. It DOESN’T have integrated GPS.

So if you wear the watch without having the phone with you then you won’t get any location or altitude tracking. Not so great.

4. Will it connect to existing activity trackers such as Strava or Nike+?

Apple generally has a walled garden approach, in that they prefer that their technology and hardware is only used in conjunction with their own software. So it’s likely that the Apple Watch will only be compatible with their ‘Health’ app, or any others that they may release in future running on iOS.

5. It has a retina display (really good quality) and what Apple are calling ‘Force Touch’.

This is a way of the watch’s touchscreen knowing the difference between a soft tap and a harder, more purposeful press, increasing the options for interactivity.

When Apple introduced the pinch-to-zoom feature with the original iPhone, it was game changing. Remember when you used to have to move the cursor around with your finger and tap the links? These watches are a lot smaller than an iPhone and if you have fat fingers like me you could be pinch-to-zooming for a while before you get where you want.

So apple have invented the digital which, rather than breaking new ground again, actually takes us back to the good old days of roll-a-button to zoom. This however is super-silky and looks intuitive to use.

There have been times when I’ve used my TomTom Runner Cardio on a Saturday for a good long workout and come back to it a week later to find it still with enough charge to use again.

The Apple Watch will give you an average 18 hours of battery life. If you use it for a long workout, you can expect it to last for 7 hours. It takes 2.5 hours to charge the Apple Watch to 100% power, although with the magnetic charger attaching via the reverse of the watch face, you’ll need to take it off to charge it.

Going for the larger 42mm version will give you a heavier weight on your wrist, but slightly longer battery life.

8. It has lots of features, some useful, some gimmicky…

– The new ‘Taptic Engine’ means the watch gives you a gentle tap when you receive a text, email or other notification. You can also get another Watch wearer’s attention by tapping your own watch… which taps them through theirs. Or even share your heartbeat with someone, if you really want. 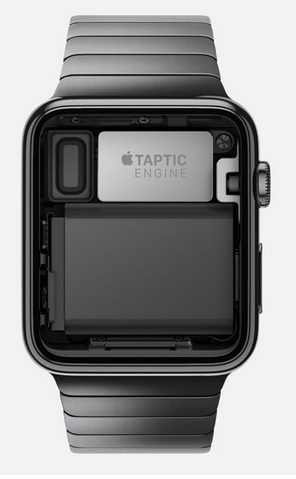 – The fitness app will keep track of exactly how much you move or don’t move, giving you an admonishing tap if you’ve sat down for too long.

– You can draw something with your fingers on the touchscreen.. and that sketch will appear on another wearer’s watch. Cool huh?!

9. It will show you which way to go at a glance of your wrist.

10. The Apple Watch DOESN’T have a camera.

The second of the most glaring omissions (no GPS being the first). You won’t be able to take James Bond like snaps as you run, or conduct Star Trek style Facetime conversations face to face with your pals. I can see this being a sure fire addition to the next generation watch.

You can use it as a remote for the camera on your iPhone though.

11. It’s water resistant but NOT waterproof!

As Apple themselves say:

Apple Watch is splash and water resistant but not waterproof. You can, for example, wear and use Apple Watch during exercise, in the rain and while washing your hands, but submerging Apple Watch is not recommended. 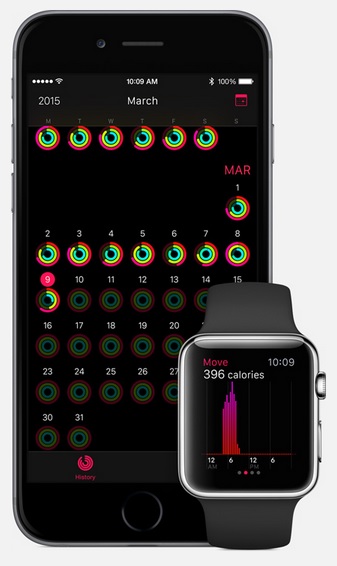 Apple have agreed to give us an Apple Watch Sport for review, so check back soon after we literally put it through its paces! 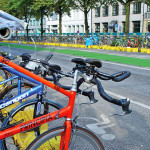 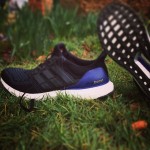